Is it Achievable to Drink 2 Litres of Water a Day?

It is something we hear all over media and from medical professionals. Drink at least two litres of water a day.

Studies show that it helps with general health and can even affect your mood if you suffer from mild dehydration. AIPT Head of Content, Kim Droney, tests if drinking two litres a day can really help with health issues.

I decided to do the two litres of water a day challenge because I feel that I've probably been neglecting my water intake lately. You see, I am a coffee addict, and the scary bit is I drink significantly less coffee now than a few years ago. At my deep, dark rock bottom of coffee addiction, I was at seven coffees a day. And these were proper full strength coffees from an espresso machine, not your nasty instant trash. I am a Mum of a three-year-old which means coffee is life. Had a late night? Coffee. Feel run down? Coffee. Had the three-year-old ask you where babies come from? Coffee.

To make matters worse, I have a condition called fibromyalgia which makes me more sensitive to pain. Lately, I have been suffering from really bad headaches. The kind that makes you run for your bed, turn the lights off and eat all the codeine in the house. I have even kicked my coffee addiction for a few weeks and gone decaf to beat the headache monster. It didn't work. So I'm hoping that by drinking two litres a day my headaches decrease a fair amount. But really, I hope that this week will kickstart a change in my brain and make drinking water all the time, a natural thing.

I completed over two litres, and I found it reasonably easy. I did spend a lot of time in the toilet which made me think that I haven't been drinking enough water (or maybe my bladder lost its mind through childbirth several years ago). I think having an 800ml bottle really helped get me over the line. During the day I used a little bit of herbal tea to go with it. I found that I didn't eat that much today and also I found that it was probably more straightforward than I thought it was going to be. My overall health feels good, and my headache was less today, so I guess that's a good sign of things to come.

I worked from home, and I thought that doing two litres of water a day would be much easier when I was on my own. However, because I was working on a large project, I struggled with it throughout the day and had to remind myself constantly. I think that if I had been in the office with others that were drinking water during my challenge, I would have done better.

By the end of the day I needed to force myself into drinking the extra water, and I think I still had 500ml left. I think it's easy to achieve if you make it part of your day but if it is something that you're not doing regularly drinking two litres of water can be really hard. To increase my intake, I ended up drinking a few cups of bone broth in the evening to make sure that I was tracking correctly.

Working from home I believed I would achieve the goal, but at 3 pm I still had 800ml to go. To be honest, today went to hell on the waterfront. I met the amount but had to push myself. The added problem in this was I had to go to dinner with family. I was actually guzzling water like a crazy lady before leaving the house, and I forced myself to drink 500ml before I left. At dinner I made myself feel less guilty by adding a glass of sparkling water beside my wine glass. However, I definitely drank more wine than water!

Back in the office and I found the challenge super easy. I think this is because I could see and hear others around me drinking water. One of my teammates even had a little app that made a pouring water sound which prompted me subconsciously. This trickling water sound may have also added to the bathroom trips for the day (tiny motherhood bladder is obviously to blame).

It was the weekend, and I came nowhere near my goal on both days. My husband was sick, and it wasn't until I recognised signs of dehydration that I started drinking water. I noticed my hands were more wrinkled and my mouth was dry. To help increase my intake, I used my SodaStream on Sunday and added some lime juice. It made me feel like I was having a vodka, soda and lime without all the naughty bits. 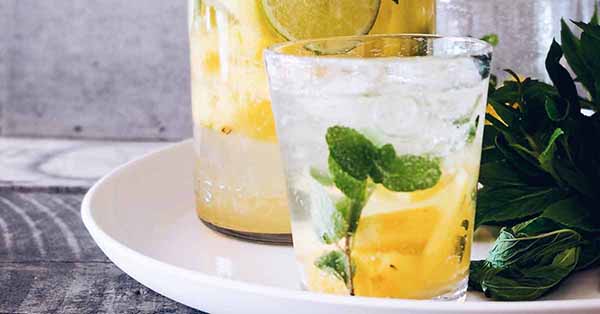 Today I made my goal! I made an effort to drink a fair amount of water after having a few coffees in the day. I was much more conscious of what I also ate today, so I had soup to increase my liquid intake at lunch. At dinner, I added a glass of soda water beside my wine as well. This is something that I do in summer regularly, but I have a terrible habit of not doing it in winter. It also stops me from drinking a ridiculous amount of wine all on my own, which to be honest, most mums with three-year-olds do!

But did it work?

This challenge made me much more aware of not drinking enough water during the working day. Most of my focus on water is when it is hot, or I am exercising, but the reality is that I still need to increase my intake without these things.

I did have a few days that my headache was less severe, but unfortunately I still had a one each day. However, I am calling the week a win since my headaches did reduce by a small amount. Did it make me drink less coffee? Absolutely!

Mentally I have also made water a much bigger part of my day. I now make sure I have gas cartridges for the SodaStream so that I never run out. I flavour my water every day now with mint, cucumber or herbal teas. But the best investment has been in a big water bottle with a straw. Now I can drink 500ml without even thinking, which helps balance the wine and coffee consumption ;)

Give yourself the ultimate Christmas present and become a Personal Trainer! Our Complete Personal Trainer^ Program or the SIS30315 Certificate III in Fitness course would be perfect for you! Enquire now to speak to one of our career advisors for more information!

^The Complete Personal Trainer consists of the SIS40215 Certificate IV in Fitness + entry requirement units. Please contact us for further details on the course structure.